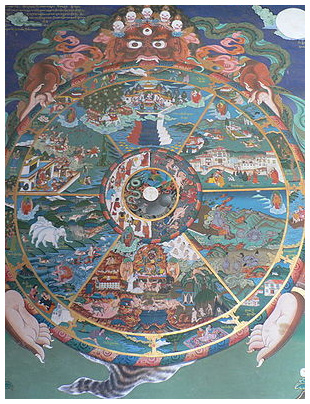 Buddhists believe all living beings are born into one of the six states of existence (Samsara in Sanskrit, the cycle of life and death). All are trapped in this wheel of life, as the Tibetans call it.

All beings within the six realms are doomed to death and rebirth in a recurring cycle over countless ages -- unless they can break free from desire and attain enlightenment. Further, upon death, all beings are reborn into a lower or a higher realm depending on their actions while still alive. This involves the concept of Karma and Karmic Retribution. The lowest three states are called the three evil paths, or three bad states. Beings in Hell. The lowest and worst realm, wracked by torture and characterized by aggression. Hungry Ghosts. The realm of hungry spirits; characterized by great craving and eternal starvation. Animals. The realm of animals and livestock, characterized by stupidity and servitude.

Asura. The realm of anger, jealousy, and constant war; the Asura (Ashura) are demigods, semi-blessed beings; they are powerful, fierce and quarrelsome; like humans, they are partly good and partly evil. Humans. The human realm; beings who are both good and evil; enlightenment is within their grasp, yet most are blinded and consumed by their desires. Deva. The realm of heavenly beings filled with pleasure; the deva hold godlike powers; some reign over celestial kingdoms; most live in delightful happiness and splendor; they live for countless ages, but even the Deva belong to the world of suffering (samsara) -- for their powers blind them to the world of suffering and fill them with pride -- and thus even the Deva grow old and die; some say that because their pleasure is greatest, so too is their misery.

One may argue that these realms can also co-exist and intersect with each other upon the Earth Plane and can be either taken literally or linked to one's psychological condition. We may even postulate that most people actually belong to the realm of animals. The realm of stupidity and servitude. This is how the elites classify us (certain UN and legal documents make references to humans and OTHER animals). The true human realm can be entered into by overcoming base animal desire, forgoing pleasure and learning spiritual discipline. Drug addicts and tortured souls (police, army, thugs, murderers) populate the least desirable realms. Royalty, the privileged elites, politicians and Hollywood stars either gravitate towards or are born into the realm of the gods and demigods, the realms of competition and pleasure. But, in doing so, they miss out on the opportunity of any great spiritual advancement. It's possible to track each individual soul's journey down the timeline of History and follow it as it progresses and regresses within the six states of existence. To follow a soul's path beyond the Earth Plane and into the other states of existence, including the realms of the gods, requires tremendous skill and exceptional training. Edgar Cayce was a complete novice at accessing past life information. I have only come across one man, Aleister Crowley, who seemed able to obtain a little accurate insight into a few of his own past lives. This was only achieved with the aid of some prolonged and serious meditation practice (in between killing people with Black Magic spells) and with a sufficient degree of objectivity. All other public past life information I have investigated is either grossly inaccurate, heavily distorted or completely fabricated. 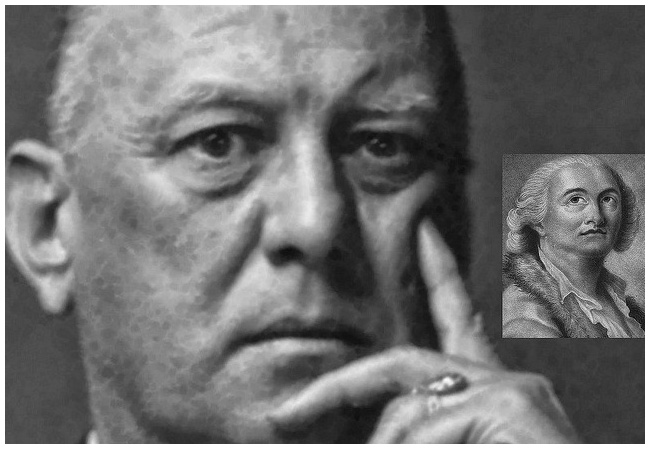 Crowley correctly identified Alessandro Cagliostro as one of his own past lives. It is rumored that Cagliostro was a pupil of the Count of St. Germain. Crowley never made a big thing out of his remarkable resemblance to his past life counterparts, preferring to dismiss past lives as merely a quaint and abstract possibility.