"Billy" Eduard Albert Meier (born February 3, 1937) is a citizen of Switzerland who is the source of many controversial UFO photographs. He presents these photographs as evidence to support claims that he is in contact with extraterrestrials. In addition, he has also presented other controversial material during the 1970s such as metal samples, sound recordings and film-footage. Meier reports regular contacts with extraterrestrials he calls the Plejaren. Meier claims that the Plejaren look similar in appearance to humans from Northern Europe, and states that the Plejaren homeworld is called Erra. It is located in a dimension which is a fraction of a second shifted from our own dimension, about 80 light years beyond the Pleiades, an open star cluster. The Plejaren were given the name Pleiadians by Meier up to 1995.

Billy Meier has claimed to be the most advanced being on the planet. What I would say is that when a genius fails to reach the very highest states of consciousness, he is forced to resort to fakery to convince himself and others of his god-like status.

The composite character of David Manning in the movie and book 'Out on a Limb' is partially based on Shirley MacLaine's meeting's in Switzerland with UFO Contactee Billy Meier. Charles Silva has claimed that he is the main inspration for the David character. Silva told his story in a book called "Date with the Gods" in 1977. When he showed it to actress Shirley MacLaine, she asked him to take her to Peru. Their adventures together lasted the next five years, after which MacLaine wrote her famous best-seller, "Out on a Limb." In that book, and in her 1987 ABC TV mini-series of the same title, she says a character named "David" took her to Peru, taught her about reincarnation and astral projection, and told her about his friend from the Pleiades. Silva says MacLaine broke her promise to tell what she really learned from him about coming events on earth, including geological changes, political upheavals, and alien landings. He says she was pressured to leave all that out of her book by powerful friends, including Bella Abzug and David Rockefeller. So, Silva decided to go on a lecture tour and tell his own story. In his promotional material, he called himself "The Real David from 'Out on a Limb'." Not surprisingly, his lectures and seminars drew large crowds. It wasn't long, however, before Silva got a letter from Bantam Books, the publisher of "Out on a Limb," warning him that he was illegally using copyrighted material in his lectures. He shot back an angry reply, asking if anyone at Bantam was aware that he had published all this material himself in 1977. Going on the offensive, Silva hired a lawyer and filed suit against Bantam, MacLaine and ABC Pictures. Silva claims that Shirley MacLaine signed an affidavit which says that he is David. Silva considers that affidavit a victory. But his legal struggle with MacLaine, he thinks, may have caught the attention of other powerful people who didn't want his story to be validated in so public a fashion. He started lecturing again. And then, in 1991, he found himself under suspicion of child molestation. "I couldn't believe it," he says. "Somebody charged me with first degree molestation of a six year old child." Silva says he thinks the molestation charge against himself, and the similar charge against well-known UFO researcher Wendelle Stevens, were both set-ups. "If you rob a bank, some people might consider you a hero," Silva says. "But if you molest a child, everybody sees you as the scum of the earth. It is the lowest of the low. It totally discredits you." In Silva's case, it got him deported. Did Leonardo da Vinci perpetrate history's greatest art forgery?  Leonardo da Vinci is suspected of faking the image of Christ's face on the Turin Shroud using his own features. The relic has inspired generations of pilgrims who have flocked to see what they believe is the face of the crucified Jesus. But it has also provoked bitter controversy after scientists carbon-dated it to the Middle Ages. Now an American artist has entered the fray, putting forward her own theory about its origin. Lillian Schwartz, a graphic consultant at the School of Visual Arts in New York, claims that the image is a self-portrait of Leonardo, which was made using a crude photographic technique. Using computer scans she found that the face on the Turin Shroud and a self portrait of Leonardo da Vinci share the same dimensions.

Leonardo da Vinci is just one of the many interesting previous incarnations of Billy Meier, according to the Akashic Records. The full story, however, should be of great interest to the elites, mystics and occultists. Portrait of a man in red chalk (Leonardo) The portrait of a man in red chalk (circa 1510) in the Biblioteca Reale, Turin is widely, though not universally, accepted as a self portrait of Leonardo da Vinci. It is thought that Leonardo da Vinci drew this self-portrait at about the age of 60. The portrait has been extensively reproduced and has become an iconic representation of Leonardo as a polymath or "Renaissance Man". Despite this, some historians and scholars disagree as to the true identity of the sitter. The difference between genius and stupidity is that genius has its limits!

The Wisdom(?) of Billy Meier

Michael Posted on Thursday, May 30, 2002 - 09:00 am Hello Billy, Regarding the concept of kundalini, can you explain what this actually is, if it indeed actually exists? Salome, Michael Horn ANSWER: Hi Michael, That's something that does not exist. It's certain people's imagination only, as it is the case with the chakras. Norm Posted on Wednesday, May 29, 2002 - 02:01 pm Hi Billy, I was wondering if you are familiar with the theories behind the so-called New World Order? Part of the theory is as follows. Secret and not so secret groups and organizations are united in trying to create a One World Government, that will be secretly governed by them, while at the same time making it seem Democratic to the rest of the world. Is There anything you can say about these groups. Thank You, Norm ANSWER: Hi Norm, This is nonsense. It is the imaginary work of people who are trying to make money by writing fantastic books about something that is not true. They are claims and theories only. Michael Posted on Sunday, August 25, 2002 - 11:35 pm Hi Billy, About 30 years ago a voice popped into my head and told me some specific things that would occur in the future, some of which already have. Was this, as it said my "future self" or is there a more accurate explanation for who/what this was? Thank you, salome, Michael ANSWER: Hi Michael, People who hear voices in their head are suffering from a form of schizophrenia (there are many different forms, etc.). No, this was not your "future self". Scott Posted on Wednesday, September 27, 2006 - 06:27 pm:  Dear Billy, Hello, Do you know where and when the last incarnation of your spirit form took place, before you "flew" to Earth to begin your present series of lifetimes beginning with Enoch? Thank you very much Salome Scott Answer This kind of questions won't be answered because to know those things is of no importance. Matt Posted on Thursday, September 28, 2006 - 08:16 pm:  Hi Billy, you haven't spoken much about what things U.S. Presidents George H Bush and Bill Clinton did in their Presidency. What can you tell us about them? Answer Nothing special Simon Posted on Monday, August 28, 2006 - 11:44 pm:  Are the claims of Bob Lazar true? If so, which races' beamships did he attempt to reverse engineer? Simon. Answer That's a hoax. Norm Posted on Monday, March 13, 2006 - 05:57 pm:     Hi Billy, I remember reading that the Giza Intelligence created the Shroud of Turin. Could you list some other events where the Giza Intelligence influenced history that are currently unknown. Answer The Shroud of Turin was not created by the Giza Intelligences. Btw: It shows the image of an Italian merchant in the first half of 1300. The picture was produced by his brother, an alchemist. It's actually the first photograph that was ever produced (with the aid of silver iodide and sunlight). Just recently Billy had asked Ptaah about the shroud but has not yet typed down the contact report. Therefore more details will follow. (Note by CF: The GI were involved with the production of the Fatima vision.) Scott B. Posted on Monday, November 26, 2001 - 03:59 pm Hello Was the man known as Nostradamus ever in contact with any type of ET intelligence? Is the spirit form of Nostradamus alive in another personality today? Thank you Scott B. ANSWER: Billy doesn't know.

In ancient Greece, Plato (427-347 BC) and Aristotle (384-322 BC) discussed the best population size for Greek city states such as Sparta, and concluded that cities should be small enough for efficient administration and direct citizen participation in public affairs, but at the same time needed to be large enough to defend themselves against hostile neighboring city states. In order to maintain a desired population size, the philosophers advised that procreation, and if necessary, immigration, should be encouraged if the population size was too small. Emigration to colonies would be encouraged should the population become too large. Aristotle concluded that a large increase in population would bring, "certain poverty on the citizenry, and poverty is the cause of sedition and evil." To halt rapid population increase, Aristotle advocated the use of abortion and the exposure of newborns. 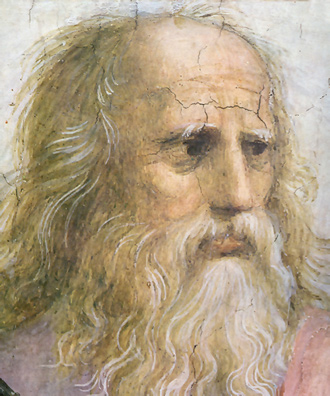 Leonardo da Vinci as Plato, as depicted by Raphael in ‘The School of Athens’

The philosophy was most famously expounded by Plato, who believed human reproduction should be monitored and controlled by the state. However, Plato understood this form of government control would not be readily accepted, and proposed the truth be concealed from the public via a fixed lottery. Mates, in Plato's Republic, would be chosen by a "marriage number" in which the quality of the individual would be quantitatively analyzed, and persons of high numbers would be allowed to procreate with other persons of high numbers. In theory, this would lead to predictable results and the improvement of the human race. However, Plato acknowledged the failure of the "marriage number" since "gold soul" persons could still produce "bronze soul" children. Plato's ideas may have been one of the earliest attempts to mathematically analyze genetic inheritance, which was later improved by the development of Mendelian genetics and the mapping of the human genome.

If the maximum limit of children is reached in a family on a planet that is menaced by overpopulation, natural plant substances can be added to their food in order to prevent further pregnancies.  This, or some other method, is necessary when a planet is no longer able to sustain a certain number of humans without artificial interference.  It is related to spiritual evolution.

The Aryan race envisioned by Naziism was a "superior race" to the supposedly  lesser races of the world, most notably the Semitic race. The classic icon of  the race was the blond-haired, blue-eyed Nordic genotype. However, the  proponents of Aryanism did not specify these traits for the descendants of the ancient Indo-Europeans. But only those of "superior" genetic stock would make up  the eventual "master race" to be created by selective eugenics programs.

There’s a strong current of thought among ufologists, Gnostic religious cults, conspiracy theorists and general quacks that a bunch of humanoid extraterrestrials closely resembling “Aryans” have visited the earth on several occasions. Some speculate that it’s from these Nordic aliens that the entire “Aryan race” is descended.

This is another variation on the Nordic aliens idea, discussed by ufologists. Some believe that “Aryans” aren’t a bunch of extraterrestrials at all, but rather divine messengers, sent from the heavens to watch over us all, and – where necessary – intervene.