Francisco Antonio de Lorenzana (1722-1804) actively carried on social work, founding hospitals and asylums. During the French Revolution he was a generous benefactor of the exiled French clergy, over five hundred of whom he received into his own diocese. In 1789 he was created cardinal by Pius VI, and from 1794-97 he held the post of Grand Inquisitor. In 1797 was appointed envoy extraordinary from Spain to the Holy See, in which capacity he supported the pope in the difficulties attendant on the French invasion. On the death of Pius VI he made possible the holding of the conclave in Venice by providing traveling expenses for some of the cardinals who were penniless. He accompanied the newly elected pope, Pius VII, to Rome and in order to remain at his side resigned in 1800 his archiepiscopal see. No less active in Rome than in Mexico or Toledo, he was in 1801 one of the founders of a new Catholic Academy in Rome. An inheritance of 25,000 scudi which fell to him he assigned to the poor, whom he designated as his heirs. 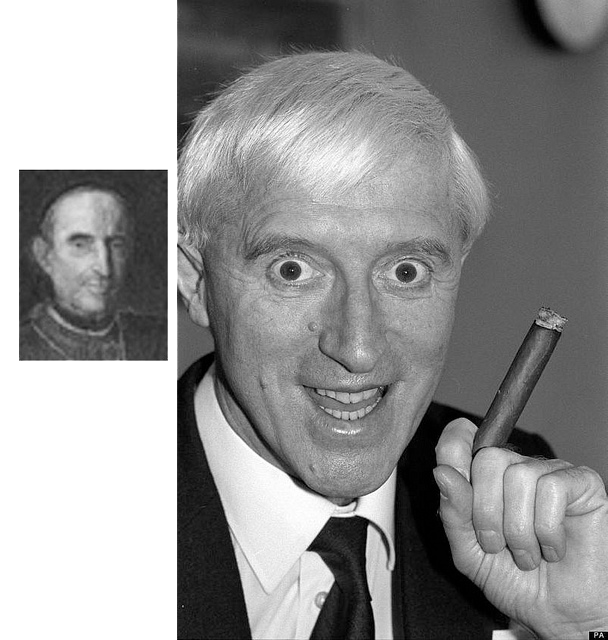 “I know that Jimmy Savile was very manipulative – a control freak and you didn’t mess with him". Jimmy Savile's PA Janet Cope. Pete Murray (Savile's fellow Top of the Pops host and BBC legend) said Savile would boast about one day getting a knighthood.

He added: “His ambition was to be canonized as a saint."

"He thought charity work would lead to that.” The Catholic Church's scandal of pedophile priests has provided ample ammunition for critics. Neuro-scientist Sam Harris, for example, has described the church as harboring an "army of child rapists".

Though the pedophile priest scandal has really only been in the public eye since 1980, allegations of abuse date back to the origins of the church, almost 2,000 years ago. On 30 September 2012, it was reported by UK newspapers that up to ten women stated that they had been sexually molested or raped by Savile during the 1960s and 1970s. One of the alleged victims was reported to have been aged 14 at the time. The ITV1 documentary Exposure: The Other Side of Jimmy Savile was broadcast on 3 October 2012. It was researched and presented by former police detective Mark Williams-Thomas, who had been a police investigator on the successful 2001 Jonathan King child-sex prosecution. It was later claimed that Savile had abused at least one boy as well as numerous girls. Mark is a former police detective who has far-reaching experience of working at the center of high profile investigations.

During Mark's police service, he specialized in child protection and major crime and he is renowned throughout the UK's police forces as well as the national media for his expertise in these areas. 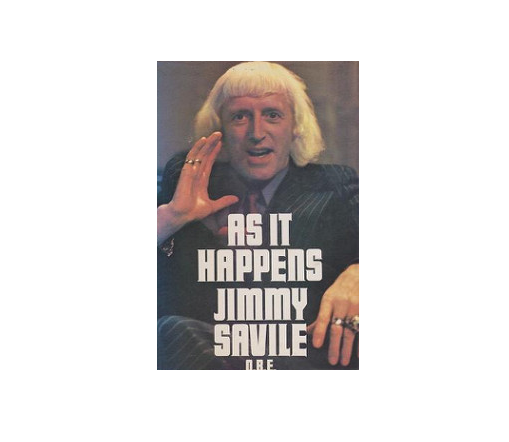 Mark (as it happens) appears to be the reincarnation of Pope Pius VI! Goodness gracious! How's about that, then, guys and gals?

In 1990 Jimmy Savile was honored by Pope John Paul II with a Papal knighthood making him a Knight Commander of the Order of Saint Gregory the Great (KCSG). It was reported in October 2012 that the Roman Catholic Church is considering stripping Savile of the honor. 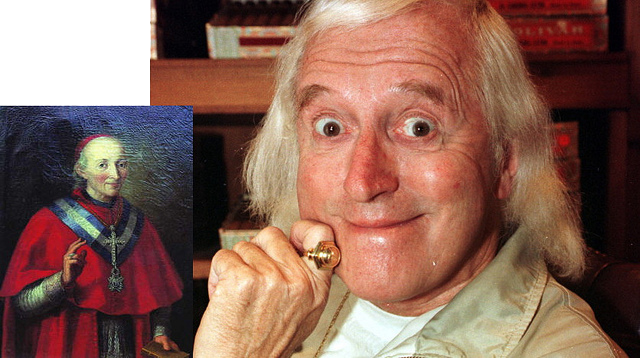 Do the elites possess hidden mystical skills or superior genes which allow them to reincarnate in positions of influence and power from lifetime to the next and prey upon the unfortunates beneath them? Is it their bizarre rituals, Satanic sacrifices and pacts with the Devil?

Or is it simply a matter of scum, by its very nature, inevitably rising to the top?

Occam's Razor is a principle stating that among competing hypotheses, the one which makes the fewest assumptions should be selected.

"He obviously found it all a big turn-on. He was watching with glee".

Would you REALLY like to know what is behind all the systematical dumbing down and rape of humankind? The grand plan of human spiritual enslavement? Does it involve blood-drinking Reptilian bloodlines? Or something even more sinister and closer to home?

New World Order operatives are opportunistic predators and in some situations it is quite understandable that they might see a sleeping populace as a potential "food" source to satisfy a wide variety of depraved appetites.

It is understood that TV and Pop Music can be effective weapons against humanity, but why not use food, water, radiation and other things to get the job done?

To be a good psychic means merely to think clearly. To have the ability to peer through the fog. A fog that has been deliberately constructed and enhanced through magical manipulation (drugs).

The words "pharmacy" and "pharmaceutical" are derived from the Greek word, pharmakeia. This word is found in the Bible in the following passages of scripture.

Now the deeds of the flesh are evident, which are: immorality, impurity, sensuality, idolatry, sorcery (pharmakeia), enmities, strife, jealousy, outbursts of anger, disputes, dissensions, factions, envying, drunkenness, carousing, and things like these, of which I forewarn you, just as I have forewarned you, that those who practice such things will not inherit the kingdom of God.

and the light of a lamp will not shine in you (the great city Babylon) any longer; and the voice of the bridegroom and bride will not be heard in you any longer; for your merchants were the great men of the earth, because all the nations (ethnos) were deceived by your sorcery (pharmakeia).

The Heritage Bible interprets the phrase "because all the nations were deceived by your pharmakeia" as "...because in your spell inducing drugs all the races were led astray."

Everyone is psychic, but very few get to exercise their psychic power to its full potential. This is because our psychic centers and minds have been turned to jelly. Achieved through powerful mind control techniques and the distribution of time absorbing toys like TV, the internet, cell phones, pornography, Facebook etc. Not to mention additives like Aspertame and Fluoride to our water and food. Not to mention radiation and chemtrails etc.

The greatest psychics among us NEVER claim psychic power.

The greatest psychic of our age, in the public domain, is not Edgar Cayce, but Alex Jones! Not even Billy Meier with his Nazi Space pals and Messiah complex can demonstrate the true power of incisive thought.

Who are the Illuminati? They are magicians (and often not real ones at that) that have successfully closed down our psychic centers (shut our minds) and have enslaved us.

Yes, many of us are contented and happy slaves, but that's not the point. A slave is still a slave.

Rudolf Steiner (1861-1925) said that black magicians and other evildoers will create medicines that will deaden people to all things spiritual: "Endeavors to achieve this will be made by bringing out remedies to be administered by inoculation . . . only these inoculations will influence the human body in a way that will make it refuse to give a home to the spiritual inclinations of the soul." But what of channeling? Everyone is doing it these days. We can flip through channels on our TVs in hypnotic trances OR we can do it without TVs and pretend to be messengers of the Gods!

Why have the incidences of channeling increased in recent times? The simple answer is that when our spiritual centers are compromised, dark forces swoop in and take possession. These forces make their presence known and start spewing their propaganda.

Their insipid messages tell us we can awaken the god force within and attain great psychic powers. Possessed people are not really psychic. They are spiritually blind and enslaved. However, they can display what people erroneously think of as psychic powers. They can gain enormous strength, shape-shift, levitate and speak in tongues, see visions and hear voices.

But they are under the control and at the mercy of external forces. They display no discernment and seem incapable of thinking for themselves. Throughout history, magicians have created or used the possessed for various purposes.

A Pharmakós in Ancient Greek religion was the ritualistic sacrifice or exile by the sorcerers of a human scapegoat or victim. The victims themselves were referred to as pharmakoi and the sorcerer was referred to as a pharmakon. A slave, a cripple or a criminal was chosen by the pharmakon or sorcerer and expelled from the community at times of disaster (famine, invasion or plague) or at times of calendrical crisis, after being given pharmakeus or drugs by the pharmakon or sorcerer who was a practitioner of pharmakeia or pharmaceutics. It was believed that this would bring about purification.

Does ritualistic sacrifice to Gaia involve drugging our population?

And if so, what comes next? 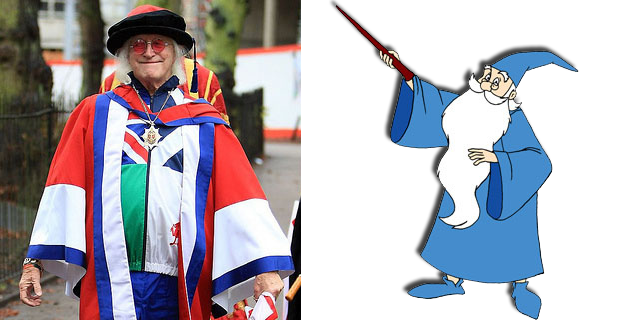 "Jimmy Savile was a master manipulator of the press and would do what he could to keep his image held high in the public conscience." DJ Tony Blackburn

"Accessing the Akashic Records accurately is, undoubtedly, a valuable and rare skill. It can, at times, however, be like rolling around in a filthy pigsty." Brianstalin 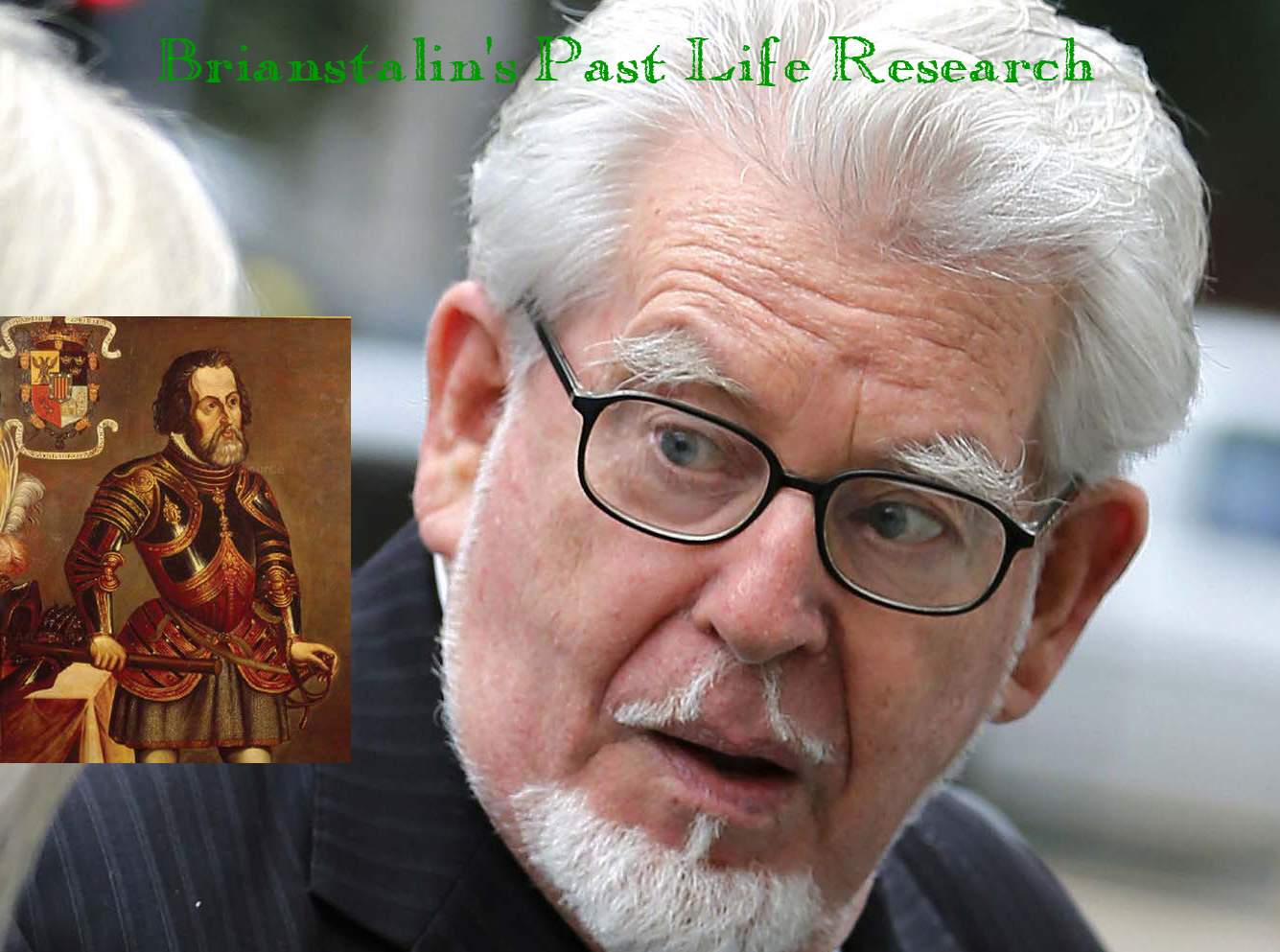 But what has anything of this to do with Rolf Harris, you might ask?


Swings and Roundabouts - Snakes and Ladders

"My weigh is on how long should society put an old man in jail for 20 to 50 year old sex crimes and how uneasy I felt with people demanding he die in prison.

It was also about how sad I felt for his family. You seem to have zero compassion for Rolf's family. And I'd really want to know why.

Sarah, Why do you read what someone has written and get it so wrong so many times?

You know a sentence that demands people die in prison is usually reserved for genocide or mass murder." 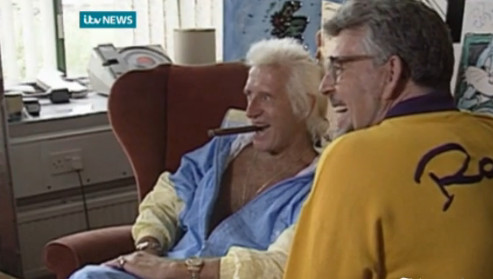 The Grand Inquisitor and the Conquistador? 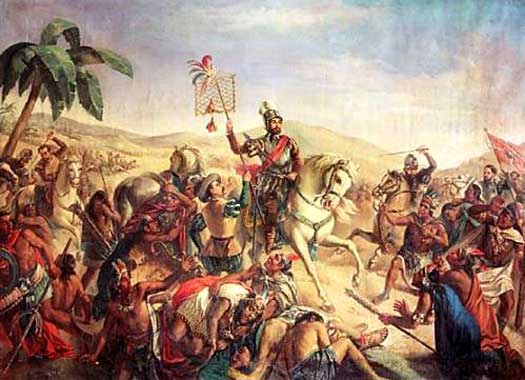 The song "Prince Charming" has musical similarities to Rolf Harris' 1965 song "War Canoe", and in March 2010 Harris claimed on BBC Radio 5live's Danny Baker Show that an out-of-court settlement had been reached and a large sum of royalties received after a musicologist had found the two songs to be musically identical.