What happens when a planet is run by networks of control freaks who consider themselves physically, intellectually, emotionally and spiritually superior to everyone else? The same networks which funded Hitler, Lenin, Stalin, Mao, Pol Pot, Al Qaeda and many others. There is, of course, a lot of death and destruction and a drive to make the elites a completely separate and technologically advanced species. "Gradually, by selective breeding, the congenital differences between rulers and ruled will increase until they become almost different species. A revolt of the plebs would become as unthinkable as an organized insurrection of sheep against the practice of eating mutton." Bertrand Russell, "The Impact of Science on Society", 1953, pg 49-50

In earlier times, such as Atlantis, the elites' main preoccupation was the genetic manipulation of their human livestock. This manipulation continues today. Rudolf Steiner (1861-1925) said that black magicians and other evildoers will create medicines that will deaden people to all things spiritual: "Endeavors to achieve this will be made by bringing out remedies to be administered by inoculation . . . only these inoculations will influence the human body in a way that will make it refuse to give a home to the spiritual inclinations of the soul." (Steiner R. Secret Brotherhoods. London: Rudolf Steiner Press, 2004, pp. 90-91).

There is a supernatural (occultic) dimension to thr New World Order, called by some the New Age Movement (and epitomized by Maurice Strong, Shirley MacLaine, Jane Fonda,Ted Turner, John Denver, Zbigniew Brezezinski, George "Thousand Points of Light" Bush, Al Gore, Hillary Clinton, the Dalai Lama, and a cast of millions worldwide), which also promises world government and sharp population reduction by the year 2000 - the "Dawning of the Age of Aqyarius". The New Age Movement is not NEW - it is as old as Satan! Herin lies an interesting parallel to the supernatural, occultic underpinnings of the Nazi Third Reich, which also aspired to global government and had some occultic/Eastern religious dynamic behind it as the New World Order/New Age Axis.

Shirley MacLaine has referred to Adolf Hitler as a great Spiritual teacher.

Life is a Cabaret Cloning, Time Travel, Immortals or Vampires? Keep it simple. Reincarnation is as old as time, itself.

Dix captured the hedonism and anxiety of a German society on the cusp of the Nazi era. In an art that mixed equal parts dread and drama, Dix produced unparalleled portraits that still bear the capacity to unsettle viewers with their nervous intensity. Labelled a “degenerate artist” by the Nazis and removed from his post as a teacher at the Dresden Academy, Dix remained in Germany throughout his career. He died in July 1969, leaving a legacy of art that speaks to the darkest days of the 20th century.


Emperor Titus of the Flavian Dynasty According to the Babylonian Talmud, an insect flew into Titus's nose and picked at his brain for seven years. He noticed that the sound of a blacksmith hammering caused the ensuing pain to abate, so he paid for blacksmiths to hammer near him; however, the effect wore off and the insect resumed its gnawing. When he died, they opened his skull and found the insect had grown to the size of a bird. The Talmud gives this as the cause of his death and interprets it as divine retribution for his wicked actions. The Illuminati Wants to Reduce the Population by 90%!!!

(From their own mouths:)

From the distinguished journalist, William Jasper, comes this report of his coverage of Gorbachev's WORLD FORUM in 1996. You will see the kind of thinking that the ELITES are manifesting in relative privacy. This is the New World Order crowd, the people behind Bill Clinton and Hillary.... Can you understand that world depopulation to 10 % of what it is now IS part of the Globalist agenda? In Heaven's name, please realize what we are up against! Why does Clinton still have an approval rating of 60 % of the voters?? Byron Weeks

STATE OF THE WORLD FORUM 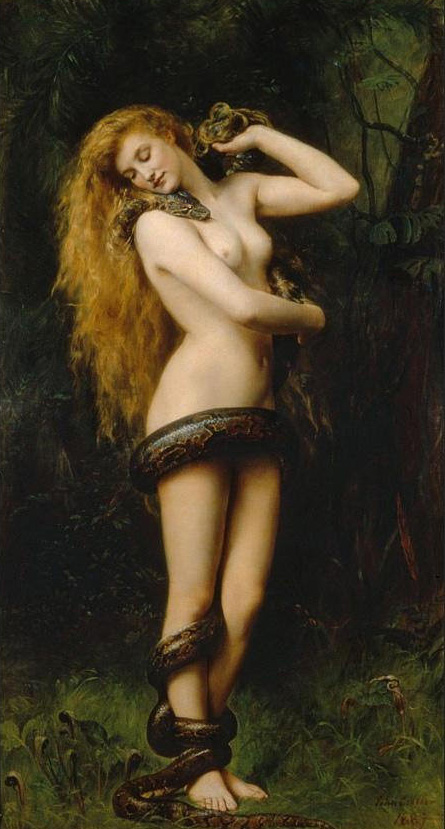 Lilith is said to come from the mud and dust, and is known as the Queen of the Succubi. When she and Lucifer mate, they form an androgynous being called "Baphomet" or the "Goat of Mendes," also known in Luciferianism as the "God of Witches". Pistis Sophia Unveiled writes that homosexuals are the "henchmen of Lilith". But what, you may ask, has that to do with Shirley MacLaine? 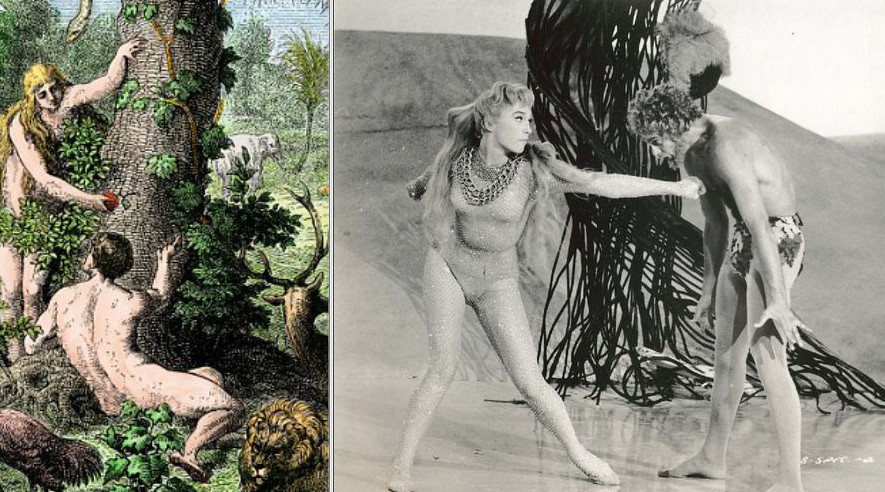 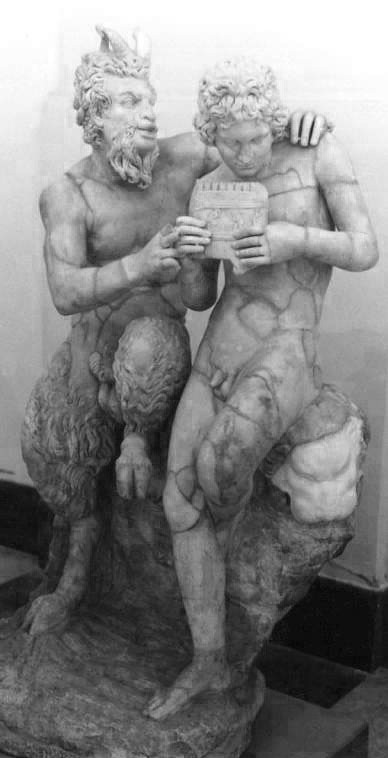 Most horror fans already know that MacLaine was originally set to play the role of Regan's mother, Chris MacNeil in the film The Exorcist. In fact, William Peter Blatty envisioned MacLaine as the character as he wrote the novel. However, the part eventually went to Ellen Burstyn and Shirley ended up playing in the sub-par film, The Possession of Joel Delaney instead. Pazuzu is the name of the demon in The Exorcist.

In Assyrian and Babylonian mythology, Pazuzu (sometimes Fazuzu or Pazuza) was the king of the demons of the wind, and son of the god Hanbi. He also represented the southwestern wind, the bearer of storms and drought. 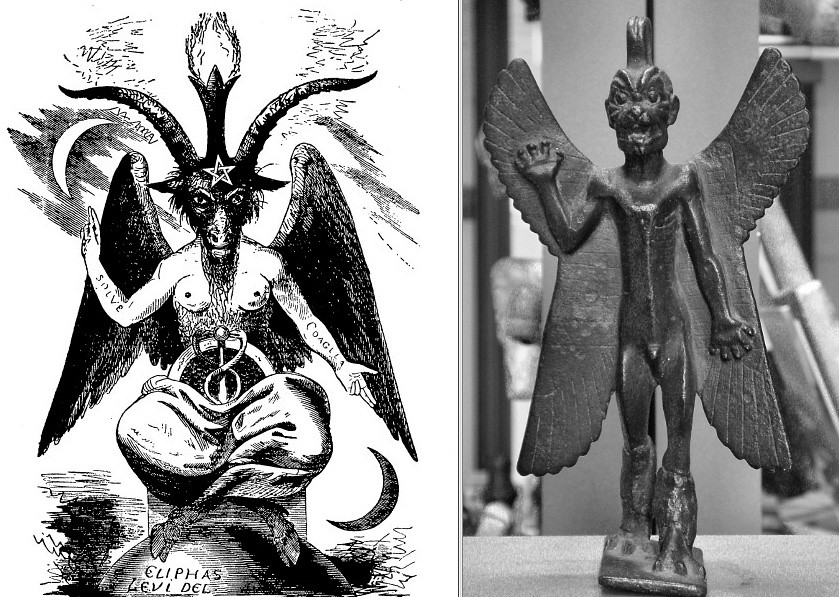 Which one are you?


After developing an interest in paranormal phenomena, MacLaine claimed to have visions of androgynous people giving birth to androgynous children and that she herself was androgynous.

How the Akashic Records Work

The protagonist of “Reclining Woman on a Leopard Skin” doesn’t so much loll as leer. Slung forward in a feline crouch, she rests her head on one stubby, masculine hand while the other tenses like a claw on a spotted animal hide. Sloping, catlike eyes peer from beneath a thick copper fringe, while a slash of crimson stains the lower part of her face. A dog with blood-red eyes pants viciously in a corner.

"Woman Lying on a Leopard Skin" supposedly depicts German actress Vera Simoilova. Whether she had time to die and reincarnate as Shirley MacLaine by 1934 is doubtful.

Different levels of access provide different sets of clues. These clues can be taken literally or as analogies - signposts to ever deeper levels of understanding. It is the process of unraveling these clues that allows discernment and wisdom to develop. The past life matches themselves are mere distractions and titillation for the weak-minded. A mind trapped in delusion will come to believe that it must perpetuate itself (both in form and in character) in a never-ending succession of dreams. 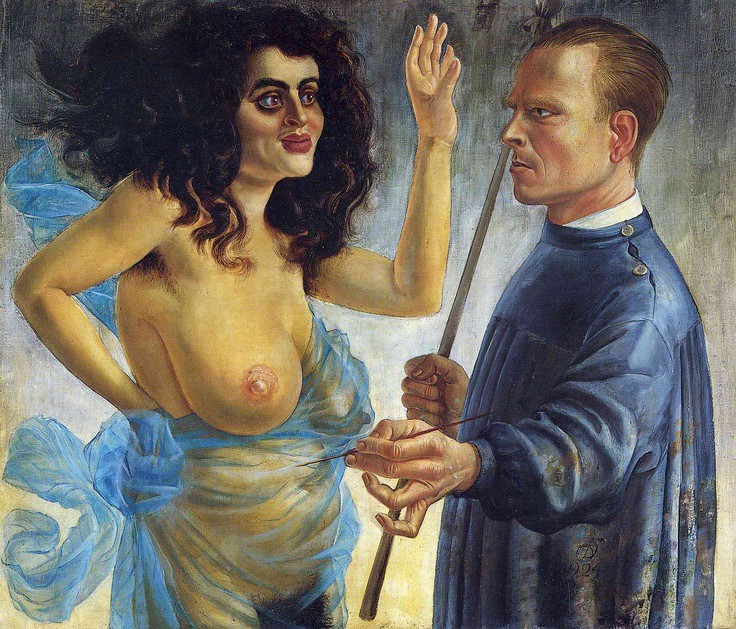 Dix's Self-Portrait with Muse is perhaps the most completely revealing of all his studies that pair artist and model.

Diether Schmidt described this model as both "terifying" and "fecund" (furchtbar und fruchtbar). 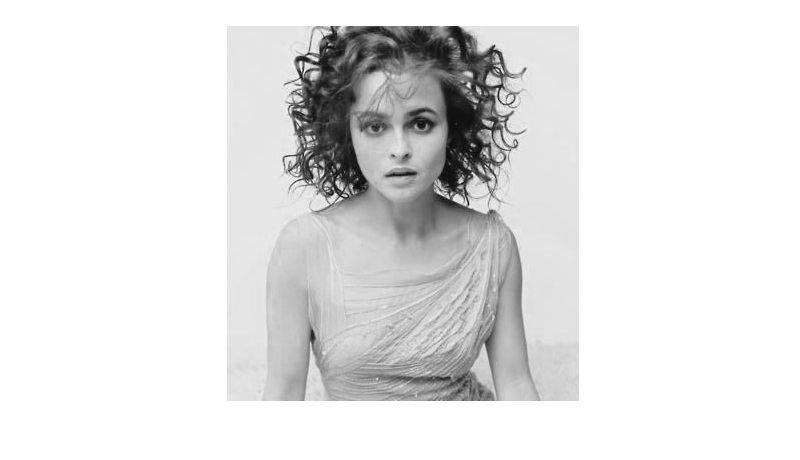 Helena Bonham Carter, CBE (born 26 May 1966) is an English actress. She made her acting debut in a television adaptation of K. M. Peyton's A Pattern of Roses before her debut film role as the titular character in Lady Jane. She is known for her roles in films, such as: A Room with a View, Fight Club, The King's Speech, and playing Bellatrix Lestrange in the Harry Potter series. She frequently collaborates with her domestic partner, director Tim Burton, in films such as: Planet of the Apes, Big Fish, Corpse Bride, Charlie and the Chocolate Factory, Sweeney Todd: The Demon Barber of Fleet Street, Alice in Wonderland, and Dark Shadows. In 2012, she played Miss Havisham in Great Expectations, and Madame Thénardier in Les Misérables.
A two-time Academy Award nominee for her performances in The Wings of the Dove and The King's Speech, Bonham Carter's acting has been further recognised with seven Golden Globe nominations, an International Emmy Award for best actress, a BAFTA Award, and a Screen Actors Guild Award. She was made a Commander of the Order of the British Empire (CBE) in the 2012 New Year honours list for services to drama, and received the honor from the Queen at Buckingham Palace on 22 February 2012.
In January 2014, British Prime Minister David Cameron announced that Bonham Carter had been appointed to Britain's new national Holocaust Commission. 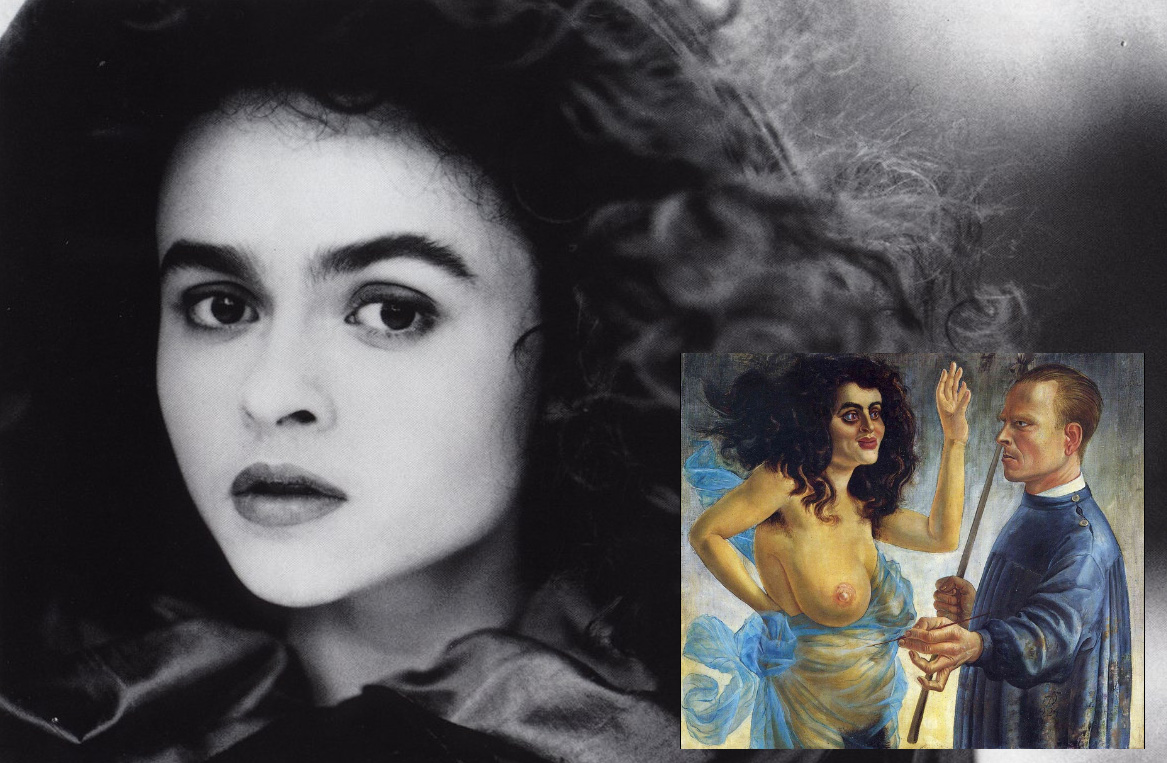 Bonham Carter's paternal grandparents were British Liberal politician Sir Maurice Bonham Carter and renowned politician and orator Violet Bonham Carter. Helena's paternal great-grandfather was H. H. Asquith, 1st Earl of Oxford and Prime Minister of Britain 1908–1916. She is the grand-niece of Asquith's son, Anthony Asquith, legendary English director of such classics as Carrington V.C. and The Importance of Being Earnest, and a first cousin of the economist Adam Ridley.

Her maternal grandfather, Spanish diplomat Eduardo Propper de Callejón, saved thousands of Jews from the Holocaust during World War II, for which he was recognised as Righteous Among the Nations (his own father was a Bohemian Jew). He later served as Minister-Counselor at the Spanish Embassy in Washington, D.C.

Her maternal grandmother, Hélène Fould-Springer, was from an upper class Jewish family; she was the daughter of Baron Eugène Fould-Springer (a French banker, who was descended from the Ephrussi family and the Fould dynasty) and Marie Cecile von Springer (whose father was Austrian-born industrialist Baron Gustav von Springer, and whose mother was from the de Koenigswarter family). Hélène Fould-Springer converted to Catholicism after World War II. Hélène's sister was the French philanthropist Liliane de Rothschild (1916–2003), the wife of Baron Élie de Rothschild, of the prominent Rothschild family (who had also married within the von Springer family in the 19th century); her other sister, Therese Fould-Springer, was the mother of British writer David Pryce-Jones. 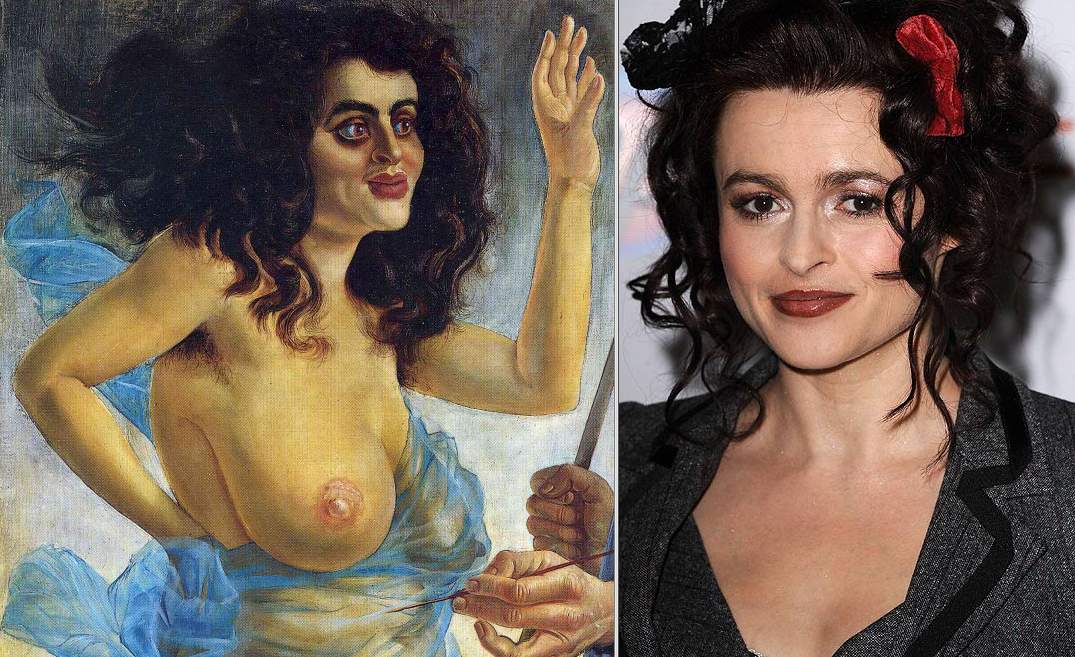 Fecundity is terrifying to the control freak globalists who seek depopulation through the end of fertility. 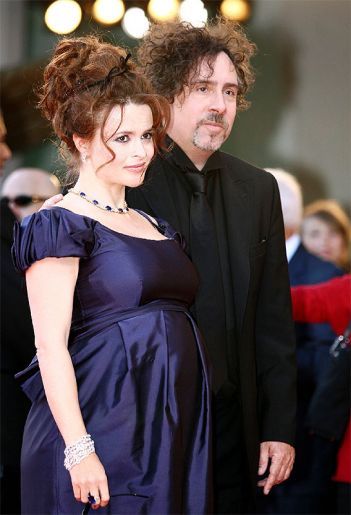 Sherlock Holmes didn't need to fabricate evidence in an attempt to frame his suspects, according to the prejudices and whimsies of his intuition.

In the search for truth, there is no room for the "if the facts don't fit the theory, change the facts" control freak attitude of the "do what thou wilt shall be the whole of the law" satanic mindset.

This is psychic (mental) power of a higher order than mere "intuition". Intuition is born out of and fashioned by skillful mind control and programming.

Intuition is based upon what we think we should feel and expect in any given situation, rather than dealing the situation head on in a unique and individual way.

Intuition is part of the mass consciousness of the common herd and is highly praised by the manipulators who laud its value and is also considered precious by the weak-minded who parrot their masters' viewpoints.

Although, I could merely be focusing upon Walter Semkiw, fabricated past life readings, bogus channeling and deluded psychics, I am actually talking about a much more widespread and insidious problem facing humanity.

The elites would call it a mind, body and soul destroying virus, attacking and eating another virus in order to save our planet. But, in the end, it's still genocide.