Connors beat out 40 actors for the lead on The Rifleman, portraying Lucas McCain, a widowed rancher known for his skill with a customized Winchester rifle.

Winchester rifle is usually used to refer to the lever-action rifles manufactured by the Winchester Repeating Arms Company, though the company has also manufactured many rifles of other action types. Winchester rifles were among the earliest repeating rifles; the Winchester repeater was incredibly popular and is colloquially known as "The Gun that Won the West" for its predominant role in the hands of Western settlers. Although, John Wayne is often seen as the all American hero stereotype, the Akashic Records see Chuck Connors as a Founding Father. Who Was Roger Sherman?

"Roger Sherman was a man who never said a foolish thing in his life." - Thomas Jefferson

Meanwhile, the Akashic Records see Piers Morgan as a man tried and shot for treason! 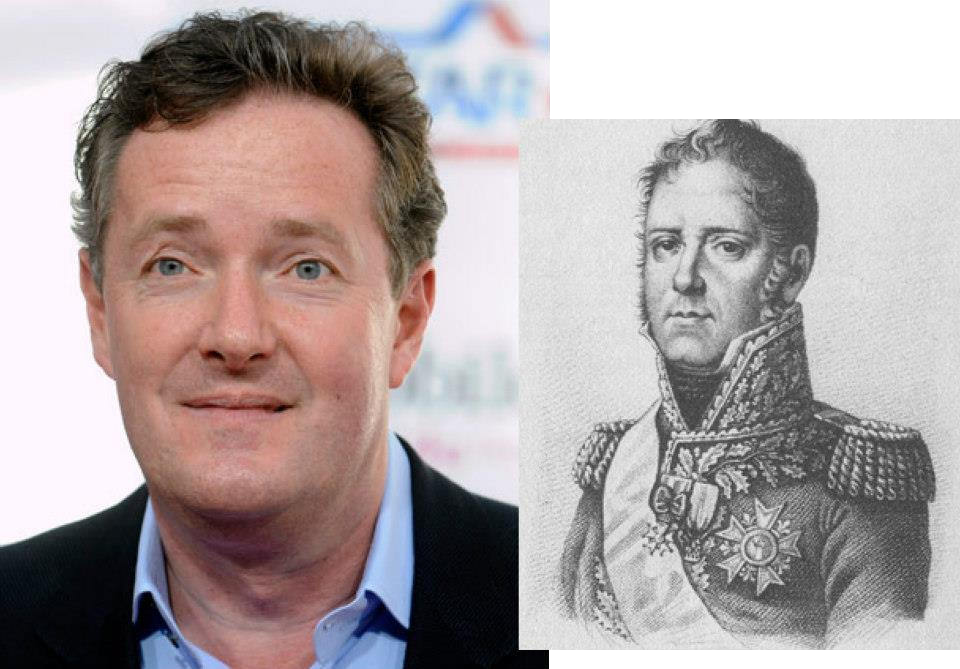 No stranger to violence, Piers Morgan is the reincarnation of Marshal Michel Ney.

Ney was given command of III Corps of La Grande Armée during the 1812 invasion of Russia. At Smolensk, Ney was wounded in the neck, but recovered enough to later fight in the central sector at Borodino. During the retreat from Moscow, Ney commanded the rear-guard and was anecdotally known as "the last Frenchman on Russian soil". After being cut off from the main army, Ney managed to rejoin it, which delighted Napoleon. For this action Ney was given the nickname "the bravest of the brave" by Napoleon.

When Napoleon was defeated, dethroned, and exiled for the second time in the summer of 1815, Ney was arrested (on 3 August 1815), and tried (4 December 1815) for treason by the Chamber of Peers. On 6 December 1815 he was condemned, and executed by firing squad in Paris near the Luxembourg Garden on 7 December 1815 – an event that deeply divided the French public. He refused to wear a blindfold and was allowed the right to give the order to fire, reportedly saying:

"Soldiers, when I give the command to fire, fire straight at my heart. Wait for the order. It will be my last to you. I protest against my condemnation. I have fought a hundred battles for France, and not one against her ... Soldiers, Fire!"

Ney's execution was an example intended for Napoleon's other marshals and generals, many of whom were eventually exonerated by the Bourbon monarchy. Ney is buried in Paris at Père Lachaise Cemetery.